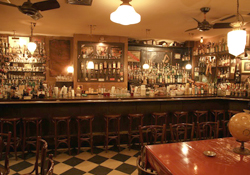 This article as follows appears in "AVENUES", the magazine for Central Japan, in April/May 2002.
<Text by Andrew Vorland>

Delving into the bowels of metropolitan Nagoya one can find many jewels in the night. And as they say, the good things in life are not always easily found. The Caballero Club is living proof of this.

Located down a dark building Hall/alley off a side street in Higashi Sakura, Caballero is truly a gem of a spot worth seeking. At the end of the dark hallway, the door opens into a club that will take you back to a time of mobsters and untouchables on either side of the Atlantic. Caballero could fit into downtown Paris or just as a comfortably host Al Capone and his merry men in Chicago. Established in 1983, by the owner known only as Boss, Caballero expanded and added a stage in 1999. Today, though once in the club you would think it was yesterday, Caballero in a live house/cigar bar. Live jazz, bossa nova or the blues can be enjoyed Thursday throughh Saturday at the club along with one of the over ten variety of cigars always on hand. Boss himself often takes up the guitar to lead his bossa/jazz band (B.C.Q.) in entertaining the electric clientele. There is a 500yen cover charge at Caballero and when there is music, a 1000yen live charge (unless otherwise noted on their schedule), but is well worth it. Along with an extensive bar (500yen up), light meals, leaning toward pasta and pizza (600yen up), are also prepared.

With its low lighting and soft selection of music, the fairly spacious Caballero Club is a perfect place for a romantic evening or for that nightcap in, say, a brandy snifer..... A place to contemplate mixed emotions over mixed drinks, as Mr. Waits, who would fit right in at Caballero, would say.

Where is Caballero Club?

It is difficult to find Caballero Club especially for one who visit for the first time. If you lost the way, please call us. phone number is 052-931-0914. But some staff are not good at speaking English. (The person in charge is Demi. )
It may be the best way to ask taxi driver, hand the map or to call us .